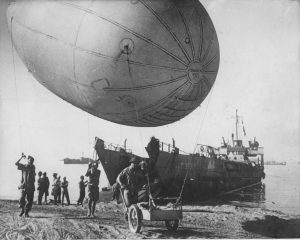 “INVASION BALLOONS PROTECT SALERNO BEACHES:
R.A.F. balloon barrage men were among the first Allied troops to land on the beaches at Salerno. Their job was to keep low flying enemy aircraft from bombing and strafing the landing barges as they came in shore. One detachment landed with their balloons in the Gulf of Salerno before daylight on invasion day. They waded ashore through three feet of water carrying their balloons, and planted them on the beach in the face of heavy machine gun and mortar fire. The balloons were flying 200 feet high as they came ashore and were let up to operational height on small hand winches as soon as the men stepped on to the mainland.
Picture shows:- A balloon is brought ashore near Salerno from a landing craft.” © IWM (CNA 1729)

This site uses Akismet to reduce spam. Learn how your comment data is processed.